Tasmania is a unique island state located at the southeastern tip of Australia. Roughly the size of West Virginia, or 1.5 times Switzerland, Tasmania is a land of stunning coastlines, ancient forests, rugged mountains and sparkling highland lakes. Over a third of the state is reserved as National Parks, of which an ever-increasing amount is declared UNESCO World Heritage Wilderness. These areas provide refuge and habitat for rare and endemic plants and animals, including survivors of the ancient southern supercontinent, Gondwana. These environments are home to wonderful outdoor pursuits such as river rafting, sea kayaking, bushwalking, cycling and world-class fly fishing (to name a few).

Girt by the Southern Ocean, the Tasman Sea and the Bass Strait, Tasmania boasts the world’s cleanest air and rejoices in pure water and fertile soils – the resulting wine and food are acclaimed worldwide.

The island’s European heritage dates back to the early 1800s, while Tasmanian Aboriginals first arrived 40,000 years ago.

Rich with a colourful history and spectacular natural surroundings, modern Tasmania also has a vibrant culture, boasting one of the best small symphony orchestras globally and home to artists, authors and craftspeople who find inspiration in this special place.

Only a short hop by plane or a relaxing passage by the ferry from mainland Australia, this natural paradise will remain in your memory for life.

Hobart, Tasmania, has the nation’s second-lowest rainfall (626 mm or 24 inches) of all Australian capital cities. The average summer temperatures sit between comfortable 21°C to 26 °C. Winter’s average is 12°C (52° F).

Come and meet the iconic Tasmanian Devil, Sarcophilus (meaning flesh-loving) harisii, the largest carnivorous marsupial in the world. Learn about their historical interaction with the first Europeans, how they got their name, the Devil, and the concentrated effort to now save this endangered species from a deadly disease. Devils live in heathland and sclerophyll forests where they shelter by day and feed by night, scavenging on carcasses of wallabies, other mammals and birds. They breed in March, and in April, the young are born resembling a tiny grain of rice. It’s survival of the fittest as they clamber to latch onto one of the four teats in the female’s backward-facing pouch. Their lifespan is relatively short, between 6-8 years, and with 90% of the wild population wiped out by the disease, it has been through the efforts of captive breeding programs and relocation of healthy devils that the Save the Tasmanian Devil Program can now focus on the recovery of the species in the wild. 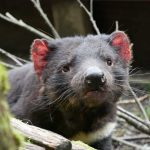 Most closely related to the Tasmanian Devil, Tasmania boasts two species of quoll (the Spotted Tail and Eastern), with the Eastern being extinct on mainland Australia and the Spotted Tail endangered. Like the Devil, they are carnivorous marsupials. However, they are an agile hunter scampering on tree limbs stalking birds, raiding nests for eggs and chicks, and sneaking into the odd chicken coup or two! Their coats are either fawn-grey or jet-black with magnificent white spots providing camouflage in the Tasmanian bush. 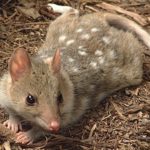 Smaller and more stocky than the wallaby, the Pademelon is a common sight in Tasmania, including many suburban backyards. Once occurring in mainland Australia, it became extinct due to predation by dingoes and foxes but has flourished in the absence of these predators in Tasmania. During early settlement, their meat and skins were the mainstays of many rural communities. They are voracious browsers of vegetable gardens, seedlings, and grasses. The species is mainly solitary and while breeding occurs throughout the year, the majority of births occur at the beginning of winter. 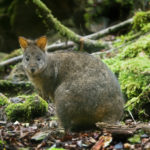 ‘Bettong’ is an aboriginal word meaning small wallaby. These unique creatures found only in eastern Tasmania live in grass tussocks or under logs with their grass nests built from material carried in the animal’s prehensile tail. They are crepuscular (active at dusk and dawn) and feed on roots, tubers, and fungi. The fungal spores are excreted in its faeces, facilitating the fungi’s distribution and colonisation. Bettongs have precision-like breeding enabling them to rear up to three offspring yearly. Like other Tasmanian mammals, their existence and survival hinge on the lack of significant predators (especially foxes) in Tasmania. 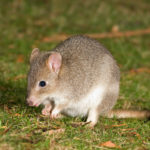 A pre-historic bird with brilliant red eyes dates from the Pleistocene era (1.6 million – 10,000 years ago). Once found in mainland Australia, they now only exist in Tasmania due to a lack of predation and an abundance of water. The locals call them ‘turbo-chooks’ as fast runners reaching speeds of up to 50 km per hour. They can be seen mostly year-round along road-sides, in grasslands and pasture, where they provide much entertainment with their dramatic behaviour (gesturing, tail-flicking) and amusing chorus sounding like a cacophony of cross-cut saws! 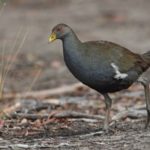 These bright, colourful birds inhabit a special part of Tasmania, a place called Melaleuca in the southwest, the last known breeding site for this critically endangered species. Less than 70 birds remain in the wild, and the return of only three breeding pairs this season (2016) has mobilised a massive public response to financially assist with one of the longest-running species recovery programs in the world. This recovery program was instigated by conservationist, artist and folk legend Deny King 1981 who built his home in this remote wilderness in the late 1940s. Orange-bellied parrots (affectionately known as OBPs) arrive at Melaleuca in mid-October, inhabited between mid-November and March. Nests are made in tree hollows as well as artificial nesting boxes. These birds, while relatively small in size, measuring approximately 20 cm long and weighing only 45 grams, have gained a large following due to their listing as one of the world’s rarest and most endangered species. 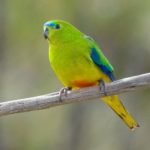 The Black Currawong is a sleek, blackbird with white-tipped tail feathers commonly associated with mountainous regions and temperate rainforests. They have a large beak and distinct yellow eyes reflecting their intelligence and reputation for outsmarting many humans! They are an opportunistic feeder and will eat lizards, mice, fruits, and your lunch if you are not careful. These birds will often join you at your picnic table and undo zips on backpacks to search for food. Black Currawongs migrate to the lowlands over winter, often in noisy flocks. Their cheekiness and audacity command our respect while their call evokes memories of rugged, wild and windswept places. 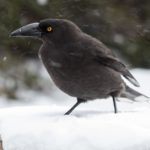 Also known as the ‘muttonbird’, the short-tailed shearwaters migrate around 15000 km from the Arctic to south-eastern Australia between September to April each year, with approximately 18 million birds arriving in Tasmania to breed. The birds’ mate for life, nesting in burrows and the chicks hatch around late January. They are graceful oceanic birds wheeling in huge numbers at sea. Large ‘rafts’ of shearwaters can also be seen floating offshore during the summer feeding months. The Tasmanian Aborigines have a long history and cultural tradition of harvesting mutton birds today. Aside from the birds providing a high energy food source, the muttonbird grease was used to coat their bodies. It provided an insulating layer for these southernmost people that existed through the last ice age when covered with ochre. 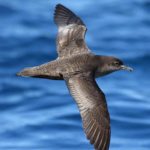 The platypus gained notoriety when in the late 1800s, a specimen was sent back to England. The taxidermists immediately suspected this creature was a practical joke, believing someone had stitched together a duck and a beaver! Such an unusual animal (one of only five monotremes, i.e. egg-laying mammals in the world) has been painted as larger than life, and most visitors are surprised to find it measures only around 45 – 60 cm in length. It lives in burrows dug into the earth banks of streams, rivers and lakes and breeds in spring. Patience is required to observe one in the wild, and they mostly appear at dawn and dusk when returning to the surface to breathe after repeatedly diving for food. The unique evolution of this animal has raised concerns about its vulnerability to environmental change. A fungal disease was detected in the 1980s, and research is ongoing to monitor potential effects on the population. Tasmanian echidnas are larger than those on mainland Australia and have more fur that can conceal some of their spines. The spines are their defence mechanism, and when threatened, they dig into the ground, protecting their head and belly, leaving only their spines exposed. With all those spines, reproduction is a tricky process, so males have a unique piece of equipment – a four-headed penis (but only use two heads) coupled with phenomenal semen with remarkable stamina. A solitary animal, yet not monogamous, during the breeding season (June – September), the amusing ‘love trains’ can be seen where up to 10 males follow a single female for up to a week. The female lays an egg directly into a temporary pouch, and the young hatch ten days later where they suckle on milk secreted from glands rather than nipples. From October onwards, it is common to see echidnas (especially young ones) strolling along the roadside and in woodlands and pastures. 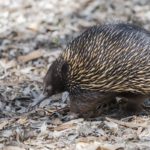 In the mid-1800s, these seals were a vital industry to the developing Tasmanian colony when they were hunted to the brink of extinction for their meat, oil and fur. They are now wholly protected, and while populations have recovered, they remain the fourth-rarest seal species in the world. They breed on the Bass Strait islands off northern Tasmania between October and January. In southern Tasmania, it is most common to see the males swimming in the sea, hauled out on rocks or appearing lackadaisical, floating on their side with one flipper sitting upright out of the water. While it may seem as if they are sun-baking, this flipper enables them to feel wind and water movement. The males are hefty fellows weighing between 220 – 360 kg and appear cumbersome on land but sleek in the water. Their dense fur coat both waterproofs and insulates them, and this is replaced with new growth each year when they moult. One often smells a seal colony long before seeing them! This is due to their diet of mainly fish and squid. As they only come ashore to rest and breed, knowing their exact population numbers isn’t easy. However, it is estimated that around 5000 seal pups are born in Tasmanian waters each year. 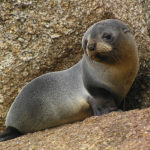 The unique hourglass pattern on the side of these animals distinguishes them from the Bottle-nosed dolphin, and they also have a longer beak. They are social animals and frolic in Tasmanian coastal waters, usually in around groups of 12, but on occasions, up to 30 individuals have been sighted cavorting alongside and at the bow of a cruising vessel. They can be seen all year round and appear curious and playful. However, they are the most common dolphin to strand in Tasmania and are relatively small. They are pretty easy to return to the water together with the rest of their pod. Rob was very knowledgeable and adaptable. He also took pains to orient me to Hobart, so I could navigate the rest of my trip. Above and beyond!

I wanted to experience Tasmania with a knowledgeable guide and in luxury / comfort. It was a tour that exceeded my expectations. We loved Rob and the coach was perfect. Thank you!

We cannot say enough positive comments about our guide! We loved everything he showed us and appreciated his willingness to change certain aspects of the tour for us.